Hydraulic fracturing, or fracking—the process of drilling into rock and injecting a mixture of water, chemicals, and sand under high pressure to fracture it and release oil and gas—is making headway around the world, causing increasing damage to the environment and human health. Even so, social movements have been effective at slowing governments and corporations interested in expanding the practice.

One of the best examples can be found in France. The first country to ban fracking, it did so thanks to the pressure applied by French citizens. Having lived in France for four years, I can attest first-hand to the strength and importance of social movements throughout the process.

The ‘Jacob Law’ (named for Minister Christian Jacob, who presented it) was approved[1] in 2011, during Nicolas Sarkozy’s presidency. It prohibits fracking for exploration and exploitation of hydrocarbons.

Later, taking advantage of division in the Socialist Party, oil companies found the help necessary to present a constitutional challenge to the fracking ban.

On October 11, 2011, however, the Constitutional Council reaffirmed the validity of the ‘Jacob Law,’ stating that it complies with all constitutional principles. France became the first country in the world to turn its back on the controversial practice. 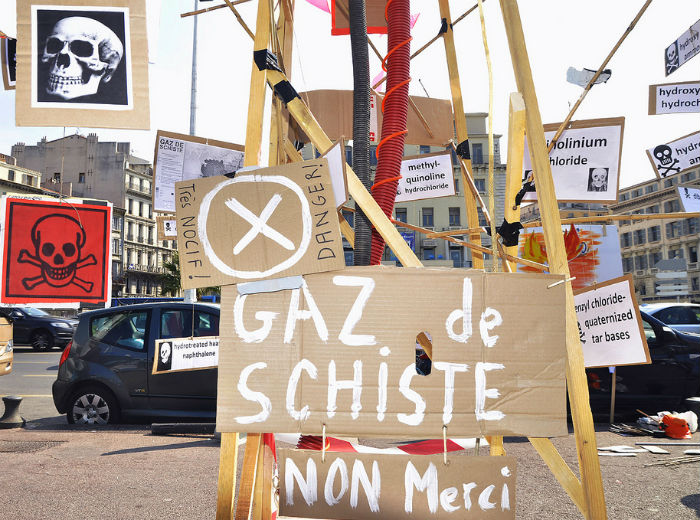 Civil society and green political parties played a paramount role in France. French citizens overwhelmingly said “No!” to fracking,[2] with more than 80% voicing their opposition[3] (this compares to 47% in the United States, according to the latest Pew Research Center poll[4]).

In France, movements are grouped together in social collectives that unite the populations of different departments. These groups were organized to be present in every part of the country where energy companies had permits for the exploration and exploitation of shale gas and oil. They remained there for the entire legal and political battle, until the prohibition on fracking finally became reality.

Some of the actions taken by the “No Fracking France” association include:

In contrast, various countries in Latin America are opening their doors to fracking. In response to this troubling trend, AIDA is helping to facilitate and coordinate a regional group, made up of civil society organizations and academic institutions, created to generate information, stimulate debate, and join forces to prevent and stop the negative impacts of fracking in Latin America.

At AIDA we consider it necessary for governments and civil society to apply the precautionary principle. Within the framework of this principle and its constitutional obligations, States of the region should adopt effective measures to prevent the risks and severe damage to the environment and human health that fracking can bring about. As long as there isn’t a guarantee that the risks and impacts of fracking can be effectively prevented and mitigated, this type of activity should not be permitted.

Raising awareness amongst citizens and social movements is key. Countries in Latin America are obligated to generate public, truthful and impartial information about the characteristics, process and components of fracking, and about its long-term impacts. Our authorities must create plural and adequate spaces for civil society in the decision-making process about the future of fracking in our territories. If they don’t, we as citizens have the right and the obligation to engage and mobilize ourselves so that those who resist can hear us.

[1] It was a closed vote in the senate with 176 votes in favour and 151 against. “Gaz de schiste: le Parlement interdit l’utilisation de la fracturation hydraulique”, Le Monde, 30/06/2011. Available at: http://www.lemonde.fr/planete/article/2011/06/30/gaz-de-schiste-le-parlement-interdit-l-utilisation-de-la-fracturation-hydraulique_1543252_3244.html

[2] The Collectif 07 Stop Shale Gas and Oil said: “ …we should be proud of the efficiency of public mobilization which, although it has not won the war, has clearly won the battle. The commitment of millions of citizens, in our department and in the whole of France, that they demonstrated every day, resisted, informed, organized themselves, mobilized themselves…sometimes with the participation of the mayors…has borne fruit. It is a test that gives hope for the fight to come…” See: “Gaz de schiste: la mobilisation citoyenne a gagné une victoire, mais pas la guerre.” Bourg Socialisme avenir. Available at: http://www.bsavenir.fr/2011/10/01/gaz-de-schiste-la-mobilisation-citoyenne-a-gagne-une-victoire-mais-pas-la-guerre/

[3] This percentage is higher than that against nuclear energy (the primary source of energy in France) according to: Chu, Henry. “Pressure builds against France’s ban on fracking,” Los Angeles Times, 22/06/2014. Available at:  http://www.latimes.com/world/europe/la-fg-france-fracking-20140622-story.html#page=1