International pressure to stop the advance of fracking in Colombia

Many Latin American governments continue to promote extractive activities—including the exploration and exploitation of unconventional hydrocarbons through fracking, or hydraulic fracturing—as a means of economic revitalization in the face of the crisis caused by the COVID-19 pandemic.

This trend contradicts the international commitments adopted by these countries to reduce emissions and mitigate the global climate crisis.

A United Nations report, to be released this month, is expected to state that reducing methane emissions will be critical to avoid the most extreme effects of global warming.

The report is based on recent data showing that carbon dioxide and methane levels in the atmosphere reached record highs last year, despite the pandemic bringing much of the global economy to a halt.

This information complements scientific evidence that methane emissions from oil and gas production—one of its major human-related sources—may be higher than previous estimates. This increase has been associated with the leakage and flaring of methane from fracking operations.

Although methane is an extremely potent greenhouse gas, it has a relatively short life cycle in the atmosphere, meaning that reducing its emissions could help the world meet our climate goals more quickly.

Colombia is an example of how the push for fracking contradicts the urgent need to combat the climate crisis and its damages. Although it is not legal to carry out fracking operations in the country because its regulation is temporarily suspended, the government has not stopped the development of pilot projects of this technique and continues to anchor its energy policy on hydrocarbons.

At the same time, there is a national and international push to stop the advance of fracking in Colombia. While the Council of State makes a final decision on the regulation, two legislative initiatives are underway: one that seeks to prohibit the implementation of fracking nationwide, and another that would prohibit the exploration and/or exploitation of unconventional hydrocarbons by any technique.

In the framework of the parliamentary treatment of both bills, which are expected to be unified, authorities from the United Nations and the Inter-American Commission on Human Rights (IACHR) participated in public hearings, in which they called on Congress to approve the legislation that would allow Colombia to move toward a fair and low-emission energy transition.

The case for protecting people and the climate

In his intervention, David Boyd, UN Special Rapporteur on human rights and the environment, referred to the climate crisis as "serious and unprecedented", highlighting that its impacts on human rights "disproportionately affect poor, vulnerable and marginalized people."

He emphasized, "new investments in fracking are incompatible with the protection of human rights."

For his part, Renato Zerbini, chairman of the Committee on Economic, Social and Cultural Rights—a body, composed of 18 independent experts, that monitors the implementation of the International Covenant on Economic, Social and Cultural Rights by its State parties—stressed that hydraulic fracturing "is closely related to multiple and ongoing human rights violations, as it causes irreversible environmental impacts and severe social affectations."

Thus, the use of the technique violates the rights guaranteed by the Covenant, to which Colombia is a party, Zerbini pointed out.

In general, the extractive industry "increases the risk for environmental defenders, territorial occupation and the impact on the rights of the communities surrounding the projects," added Soledad García Muñoz, the IACHR’s Special Rapporteur on Economic, Social, Cultural and Environmental Rights.

In sum, the representatives of the international organizations reported on the unfeasibility of fracking in climatic, social and even economic terms: "When the real costs of fracking are taken into account, it becomes evident that these far exceed the alleged economic gains," emphasized Orellana.

They referred to the international obligations of the Colombian State in terms of human rights and climate change, contained in various instruments.

Among those, they cited Advisory Opinion 23/17 on human rights and environment of the Inter-American Court of Human Rights; General Comment 36 on the right to life, contemplated in the International Covenant on Civil and Political Rights; as well as the Joint Declaration on Human Rights and Climate Change that five human rights bodies issued in 2019. The statement expresses that "failure to take measures to prevent foreseeable harm to human rights caused by climate change, or to regulate activities that contribute to such harm, could constitute a violation of States' human rights obligations."

At the conclusion of their interventions, the international authorities expressed their support for a law banning fracking throughout the Colombian national territory:

Continuing to base local economies on the extractive industry and promoting fracking only increases the dependence of our societies on fossil fuels, deepening the causes of the climate crisis and the damage it does to the most vulnerable among us. 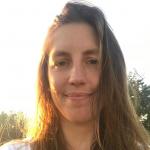 Lucia Di Giura
Lucía Di Giura is an intern with AIDA, working from Spain. She has a law degree from the Universidad Nacional de Rosario, Argentina, and a postgraduate degree in Child Law, Protection of the Person and Adoption from the University of Barcelona. Lucía is currently studying for a Master's degree in Environmental Law at the Universitat Rovira i Virgili in Tarragona, Spain, where she specializes in human rights and international environmental law.
Colombia