Except for the daily La Jornada, Image Gulf and mentions in social networks, it goes unnoticed in Mexico one of the countries with mining in the world.

Only two media in Mexico covered on Sunday July 22 the " World Day Against Mining Tóxica Open Air " promoted by Persian civil organizations in Mexico and otroas countries held protests against the worst type of mining being done, by the use of hazardous chemicals and explosives, as it has documented AIDA.

The newspaper La Jornada in the city of Mexico and Image Gulf in Veracruz covered the protests by citizens, one in the Ministry of Economy in Mexico City, one in the Canadian embassy and one in Orizaba.

It is important that the media cover mining in Mexico because according to the " Summary of Basic Indicators Mining " held by the Federal Government, in 2011, the production value of Mexican mining reached a total of 259.5 billion pesos, an amount representing an increase of 38.4% over the previous year. "

That amount, which means eight times the budget of the National Autonomous University of Mexico (UNAM), reflects that it is a very important in the country, industry where most foreign companies that have concessions from Canada. 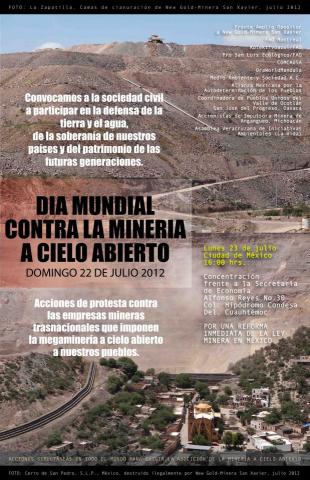 The little coverage was confirmed after a thorough review in social networks, Google and  specialized information services by words and topics . Perhaps you have covered most but what is clear is that was omitted in major national media, television and radio.

At the end of the presidency of Felipe Calderon, Mexico reached the 27 000 mining concessions, 15.7% of the national territory, "and many  of these indigenous communities.  Some, like Wirikuta or the Mountain of Guerrero, fighting to defend their territory and They demand its cancellation , "published in April this year,  the Sunday magazine El Universal.

This contradiction to the overwhelming mining presence in Mexico, shows the  power of the industry that mutes  any kind of expression linked to this business.

For decades they have demonstrated systematic abuses of mining companies that have been evidenced both environmental authorities corruption, violation of international law and attacks against local villagers.

Media companies in Mexico little space and importance give coverage of environmental issues.

Also the Congress has responsibility since the protest urge to immediately ban this method of mining work and remove the public amenity value to the extraction of minerals , including reforms to the 1992 Act.

Last Sunday the World Day was held against opencast mining.

Protest under the World Day against opencast mining

World Day Against Megaminería: Organizations demand the full implementation of the Glaciers Law in San Juan 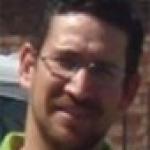