Belo Monte: the river may be dying but the search for justice never will | Interamerican Association for Environmental Defense (AIDA) Skip to content Skip to navigation

Many of the smaller islands, previously inhabited by fishermen, are now completely submerged, only the tops of trees visible above the rising water.

Home » Blog » Belo Monte: the river may be dying but the search for justice never will
16 March 2016

Belo Monte: the river may be dying but the search for justice never will

“The river is dead!” exclaimed Raimundo as we navigated in his motorboat from Altamira toward the big bend of the Xingu River.

From my perch in Raimundo’s boat, it was easy to see how bleak the landscape surrounding Altamira—the northern Brazilian city closest to the construction of the Belo Monte Dam—has become. The big island of Arapujá, located across from Altamira, has been completely deforested, causing a radical change in the currents of the river. Many of the smaller islands, previously inhabited by fishermen, are now completely submerged, only the tops of trees visible above the rising water.

I visited Altamira, and the indigenous and riverine communities nearby, with colleagues from Justiça Global. We came to update our case, and to inform those affected by Belo Monte of a new hope for justice: in December, the Inter-American Commission on Human Rights opened the case against Brazil for human rights violations caused by the dam.

In January, Norte Energía, the company charged with the construction and operation of Belo Monte, opened the dam’s floodgates without warning communities living downstream.

They say the Xingu grew seven meters in just an hour. In some communities, the rising water flooded their riverside land, taking with it canoes, boats and items of clothing.

The boat took us to a spot in the river where a large island once stood with a house in the middle. Raimundo Nonato had lived there. He raised animals and dedicated his life to fishing. It had been the perfect place to bathe in the river. It was there, in 2013, that Antonia Melo, leader of Movimento Xingu Vivo Para Siempre, baptized me as a defender of these waters. Now the island is under water, and all that remains to be seen are the tops of some fruit trees.

Leoncio Arara, an indigenous man from the community Arara da Volta Grande, says his community lives in fear of the river’s expected growth, the loss of their culture and way of life, and from the recent death of 16 tons of fish. They have seen cracks in the dike of the dam’s bypass channel and fear it will break, as the Fundão mining waste dam did in Minas Gerais. On our tour of the area, we also noticed discolored patches on the dike, which should certainly be a sign of alarm.

Leoncio said the fear keeps him up at night.

On the indigenous lands of the Arara da Volta Grande and Paquiçamba, the life of inhabitants has changed radically. They must now travel to the city (Altamira) to sell their harvest and to buy food. The changing environment has drastrically reduced opportunities for fishing and hunting, rendering their traditional subsistence lifestyle inadequate.

Leoncio says that his peoples’ traditional knowledge and community life are being lost.

Their homes are different, as is the formation of their village. Norte Energía has carelessly constructed houses that conflict with their culture, because of the location and materials used. Their community lacks even a well from which to retrieve drinking water, a condition that should have been met more than five years ago. 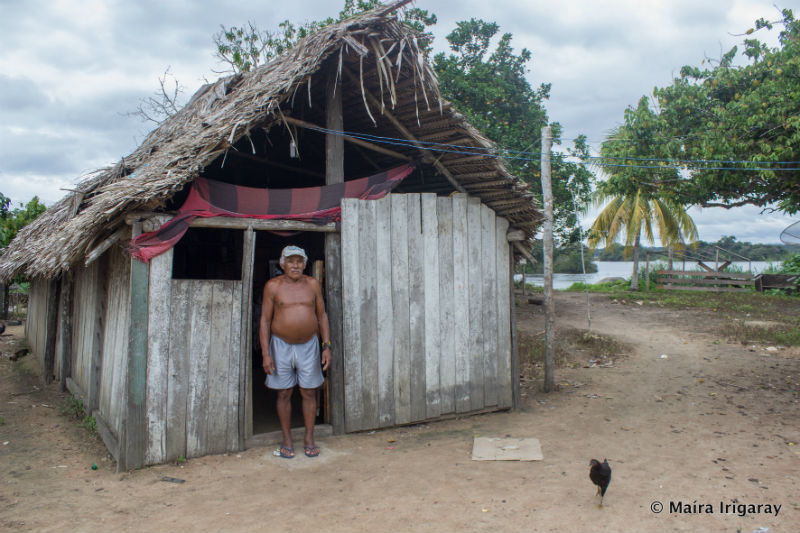 On our trip, we spent nine days in the area around the Belo Monte dam. We listened to so many stories of pain and injustice: of indigenous children that died from bad medical care in villages without access to the city; of indigenous people who left their villages to seek shelter in the city and now live in the overcrowded Casa del Indio, surrounded by filth and, often, conflicting ethnic groups.

We relived the stories of tireless struggle, like that of Socorro Arara, an indigenous woman whose home was destroyed, along with those of her relatives.

Socorro and her family all had to haggle with the company, as if their basic human rights were negotiable. Some received very little money in compensation, others the option of a prefabricated house in a neighborhood far from the river.

Socorro’s parents live in one of those neighborhoods. Behind their new cement house, they built a small home with the wood they were able to save from their destroyed home. It is there that they really live, by the light of small kerosene lamps, sleeping in hammocks. Electricity is not part of their lives. 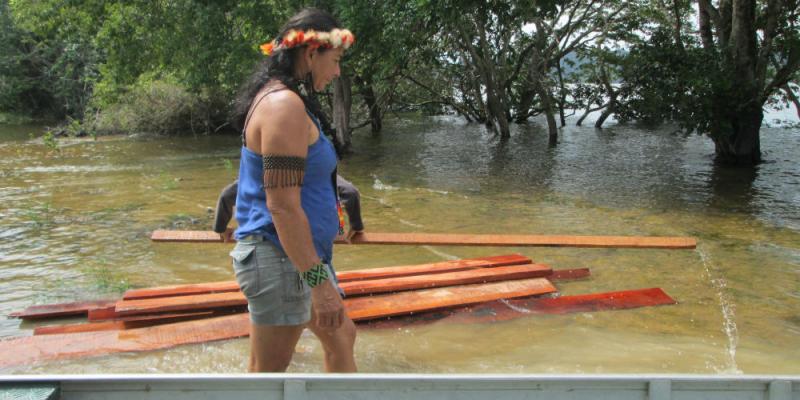 Residents of Altamira live surrounded by the ironies of the third largest dam in the world. On February 28, Altamira and various cities in the state of Para were left without electricity. The cutoff, described by the receptionist at our hotel as routine, was due to testing on one of the dam’s turbines.

There’s not much time now until the Belo Monte begins operation.

If, for the countries of the region, Belo Monte represents the cherished dream of development, for me it represents a nightmare from which I’m dying to awake.

It’s a nightmare of pain and human rights violations, in which a beautiful, living river is quickly fading away. Going with it are the lives and the dreams of those who have long depended upon its clean and healthy waters.

Human rights are not negotiable. The victims of Belo Monte need justice now!

It is that dream of justice that I hope, one day soon, becomes reality.

I wrote these lines in honor of all the people who have dedicated their lives to defending our rivers and our life.