Coral with evidence of coral bleaching.

Coral Reefs and the Unintended Impacts of Tourism

During my internship in AIDA’s San Jose office, I met up one day with a friend from the States for lunch. She told me about her trip visiting the beaches of Costa Rica. Everything she described sounded beautiful: the clear, blue water; hermit crabs that left their shells to eat breakfast in the early morning hours; sweet fruits that fell down onto the smooth sand; and the cool, green trees that provided shade from the hot Costa Rican sun.

But her mood changed suddenly, from bliss to concern, when she explained how her co-worker swam too close to a coral reef one afternoon and badly cut his thigh. She was concerned with how unprepared their tour guide was to handle the situation, and how irresponsible it seemed that tourists were allowed – with no diving experience – to swim that close to the reefs.

Leaving aside the physical dangers to humans, accidents like his, though they may seem inconsequential, have a severe impact on sensitive marine ecosystems like coral reefs.

Coral reefs are a unique and complex ecosystem, vital to the health of oceans. Yet 93 percent of the reefs in Costa Rica are in danger, and tourism is a significant factor in their degradation.

When tourists accidently touch, pollute, or break parts of the reef, corals experience stress. The coral organisms try to naturally fight off pollutants, but this process often leads to coral bleaching – when corals lose their bright colors and become completely white. Once corals are bleached, they can no longer contribute to the biodiversity of the reef community, which depends upon symbiotic interactions between fish, invertebrates, and their habitats. Additionally, since the disruption of one ocean ecosystem gravely impacts others, sea grass and mangrove communities – shallow-water plant species vital to health of the marine ecosystem – are also severely threatened by coral stress.

Another significant problem facing coral reefs is sedimentation. When solid residues are deposited into the depths of water bodies, they pollute marine ecosystems and block light needed for photosynthesis. When light is blocked, immobile coral reefs bleach and die.

In Costa Rica, sources of sedimentation include dredging, logging, agriculture and coastal development driven by the tourism sector. A Reef Under Siltation Stress: A Decade of Degradation, a study by Costa Rican biologist Jorge Cortés, documents the negative impacts of tourism on coral reefs in the Cauhita region of Costa Rica. Another case study on the reefs of Bahía Culebra found that coastal development related to the tourism sector was essentially unregulated. Because of this, coral reefs in the Pacific continue to suffer.

Sedimentation will continue to destroy reefs if better management principles are not enacted. In 1994 in Bahía Culebra, for example, a reef was burned due to sediments leftover from construction of a tourist center. Eighty percent of the reef was completely destroyed.

Building a future for coral reefs 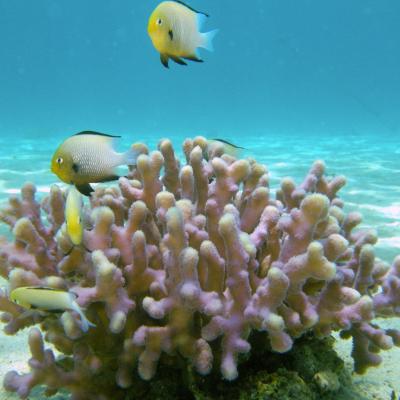 Sustainable tourism is a great concept on paper, but hard to enforce in reality. Construction of coastal properties requires waters to be dredged. It creates pollutant runoff from roads and parking lots and airports. Sewage is dumped into the ocean, and more intensive agriculture to support all the people increases sedimentation.

Although it’s difficult for an individual to stop massive projects like these, it’s easy to take small but powerful steps: not picking up wildlife for souvenirs (shells, coral rubble, plants); being conscious of what you bring with you – reusable water bottles instead of plastic bottles, a backpack for your trash in case there isn’t an area nearby to dispose of waste properly; taking the bus instead of a car; and – if possible – doing research on the hotels or hostels in which you stay. Many coastal hotels dump their graywater – wastewater from laundry, cooking, and non-toilet related household processes – into the ocean, contributing to sedimentation and contaminating coral reef ecosystems.

It’s important to be aware that many land-based activities may directly harm the marine eco-system. Being an environmentally friendly tourist is not about being perfect, but individual actions, though they may seem small, really can have a big impact.