In Peru, a High Court’s Opportunity to Combat Oil Spills in the Amazon | Interamerican Association for Environmental Defense (AIDA) Skip to content Skip to navigation

In Peru, a High Court’s Opportunity to Combat Oil Spills in the Amazon

Home » Blog » In Peru, a High Court’s Opportunity to Combat Oil Spills in the Amazon

In 2014, 2500 barrels of oil flowing through the Norperuano Pipeline in the heart of the Amazon leaked in the Cuninico River.

For native communities, the consequences of the spill persist to this day, affecting the life and integrity of the people of San Francisco, Nueva Esperanza, Cuninico and Santa Rosa, who are still struggling to find clean water to grow their crops.

In 2018, accompanied by the Instituto de Defensa Legal, they filed an injunction (known as an amparo in Peruvian courts) in an effort to prevent further spills, calling for the maintenance of the Norperuano Pipeline.

Currently, their case is before the Constitutional Court of Peru, which has an unprecedented opportunity to stop oil spills in the Peruvian Amazon and, with them, prevent the systematic violation of the rights of the indigenous peoples who live there.

The Court could do both by ruling in the favor of the petitioners and ordering state-owned oil company Petroperu to perform maintenance on the pipeline.

AIDA supported the case with an amicus brief detailing the international obligation of the Peruvian state to guarantee the adoption of the necessary measures—administrative, legal, political and cultural—to protect the rights to a dignified life and a healthy environment. 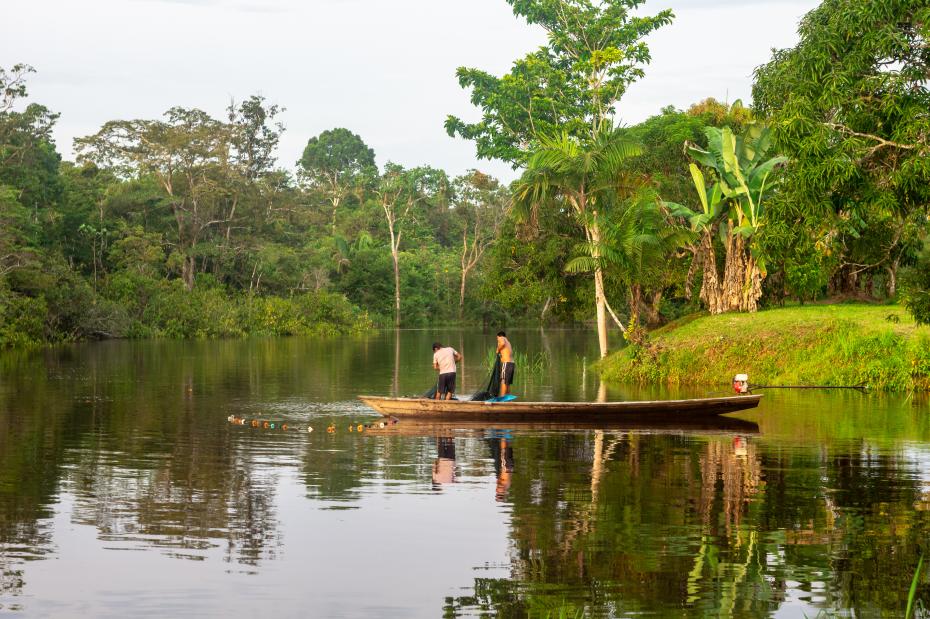 A systematic problem with oil infrastructure

Sadly, what happened in the Cuninico basin is not a one-time occurrence; it is a systematic problem facing oil infrastructure in the Amazon.

Oil spills in the Peruvian Amazon are putting entire families and communities at risk: compromising food security, contaminating ecosystems, and affecting the cosmovision and ways of life of the Amazonian peoples.

According to The Shadow of Oil, an OXFAM report from 2020, 65 percent of the 474 spills that occurred in Amazonian oil fields and from the Norperuvian Pipeline between 2000 and 2019—affecting the territory of 41 indigenous communities—were due to pipeline corrosion and operational failures; only 28 percent were caused by third parties.

Complementary data from the Organismo de Evaluación y Fiscalización Ambiental and the Organismo Supervisor de la Inversión en Energía y Minería—both public entities—confirm that, for the most part, oil spills derive mainly from a lack of supervision and oversight by the State and the absence of due diligence by the companies.

It’s evident that the responsibility for the vast majority of spills lies with the operating companies.  This has generated a structural scenario of threats and violations to the human and environmental rights of Peru’s ancestral populations.

Broader causes of the continuous oil spills in Peru include a dependence on the extraction of fossil fuels, the lack of maintenance of facilities, institutional weakness, and gaps in corporate responsibility.

The courts in the region have been, on many occasions, valuable actors in the protection of the right to a healthy environment and human rights more broadly.

In Colombia, courts have prevented the advancement of several projects that were implemented without prior consultation, affecting the rights of indigenous peoples.

In Mexico, courts have recognized the rights of indigenous communities to participate in the use and administration of minerals in the subsoil of their territory.

In Ecuador, the Constitutional Court (Ecuador's highest court) ordered the Ministry of Environment to remedy the damages caused by palm oil plantations and to take measures to control and mitigate future and potential damages.

Now it’s the turn of Peru’s Constitutional Court to defend these rights by moving to protect the Amazon from future oil spills. Undoubtedly, a positive decision would be an important regional precedent for the protection of the Amazon, an indispensable ecosystem.

The Amazon region is majestic. Stretching over 2.7 million square miles, it is the largest tropical forest on the planet and is home to at least 10 percent of known biodiversity, much of it endemic. Since ancestral times, it has been home to more than 470 indigenous peoples, quilombolos and traditional communities; among its trees and rivers you can hear more than 86 languages and 650 different dialects.

The Amazon is a vital ecosystem in times of climate crisis. It functions as a large carbon sink that stores between 90 and 140 billion metric tons of carbon dioxide, one of the most important greenhouse gases that, if released, would further accelerate climate change.

What happened in Peru highlights the importance of strategic litigation to preserve the Amazon as a key ecosystem to confront climate crisis, and to defend the peoples that call it home.