Indifference to life and health in Peru

In Peru, every year around 400 children die of cold. I learned this dramatic figure a few weeks ago when I read a column titled “Dying from Indifference,” by Congresswoman Veronika Mendoza.

I asked with genuine indignation: How is it possible that children could die of cold in a country that prides itself on its mineral wealth, its great attraction for foreign investment, its tourism and culinary strengths? A country that hosts major world events such as the Conference of State Parties to the UN Framework Convention on Climate Change?

Besides the lack of political will from our leaders, who worry more about looking good in photos taken at grand events, the answer can be found in a key paragraph of Mendoza’s column: “Where could such political will come from if no one is moved, if no one is indignant that these children die, perhaps because they tend to be “somewhere else,” usually peasants, who often speak Quechua or Aymara?”

On July 18, 2015, the government issued a supreme decree that declared a state of emergency in some districts and provinces of the country, due to frost. The first paragraph of the decree states that “every year and on a recurring basis, between the months of May and September, our country experiences weather events related to low temperatures, such as frost in our highlands, as was observed in recent seasons with extreme temperatures well below 0 ° C ...”

If these weather events occur every year, why not prevent their impacts?

In 2004, information from the Tyndall Centre, University of Manchester, revealed that Peru is the third most vulnerable country to the effects of climate change, the main cause of such phenomena as increasingly intense frost.

Indifference to the violation of human rights

Indifference in Peru not only manifests itself in children dying of cold in remote communities, but also La Oroya, a city only 175 kilometers from Lima. In a context of extreme industrial pollution, the population, including children, has for many years suffered violations of the rights to life and health.

On August 11, a strike organized by the workers of the metallurgical complex in La Oroya, and the subsequent closure of the main highway that provides access to the center of the country, set off alarm bells in the city. Not bells that should sound when pollution limits are exceeded, but those of a long-neglected social demand.

The metallurgical complex, owned by the company Doe Run Peru, is for sale and in the process of liquidating. According to information released to the public, no interested party submitted a financial offer because Peruvian environmental standards are too strict. In response, the workers took control of the road, demanding that the State relax those standards so the complex can be sold and they retain their jobs.

The protest left one dead and 60 wounded. It ended after the signing of a five-point agreement, which does not mention the rights to life and health of the population of La Oroya. 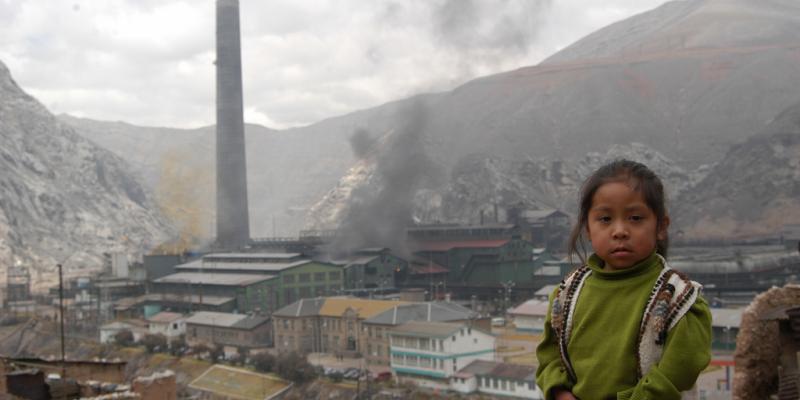 In a city that has been subjected to unchecked contamination for more than 90 years, Doe Run Peru has continued to obtain extensions to meet its environmental obligations. In July 2015, the company obtained a further extension of 14 years for the complex to meet environmental standards. But what about the life and health of the people?

The State has not seen that environmental standards are met in La Oroya. Neither has it fully safeguarded the health of its inhabitants:

• The air quality alert system has not been activated properly.

• The doctors in charge of health and the heavy metals strategy are scarce and face the constant risk of running out of resources to continue working.

• The State insists on asking the Inter-American Commission on Human Rights to lift the measures ordered in 2007 to protect the lives and health of a group of La Oroya residents.

Children are as vulnerable to cold as they are to the effects of industrial pollution. However, the State only comes to their aid in times of crisis or when it is too late.

It sounds like a cliché, but children are our hope. Let us listen so they don’t die of cold and are no longer poisoned! Otherwise, we will also be victims of the disease of indifference.