A few weeks ago I was fortunate to visit the Caribbean in Puerto Rico. I was excited about the idea of ​​finding similarities between Puerto Ricans and Mexicans coral reefs. 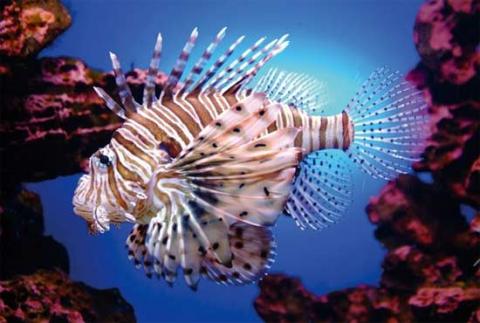 The experience was as wonderful as expected. However, he called my attention to see in all my dives copies lionfish , a native species in the Indian Ocean.

More than ten years ago, copies of lionfish escaped from an aquarium in Miami. Now, this threatens the survival of other marine animals and plants of Caribbean reefs.

This species of fish is aggressive and venomous , nocturnal and with few animals that may eat them; its existence in the Caribbean Sea destroys biopersidad reef coral larvae to eat or species of native youth, preventing the completion of their reproductive cycle.

The Convention on Biological persidad (CBD) defines invasive species, including lionfish, as "those who thrive unassisted human and natural habitats threaten or semi, outside their usual range."

They are also one of the main causes of loss biopersidad worldwide. Only in 2006, the National Commission for Knowledge and Use of Biopersidad (CONABIO) reported that there were at least 800 invasive species in Mexico, including 665 plants, 77 fish, two amphibious eight reptiles, 30 birds and six mammals .

The spread of these species increases due to changes in land use I mean for example logging and desmonte-, alteration of ecosystems and climate change phenomena that affect the vulnerability of habitats. In the case of the lionfish, it spread due to an accidental release, but natural events such as hurricanes could increase their dispersion.

Invasive species not only cause economic losses , in this case fishing, because newcomers natives eat fish resources; It is also the fact that eradication strategies are costly .

The Convention on Wetlands of International Priority Importance , since 1999 calls in its resolution on Invasive Species and Wetlands to the parties to address in their actions the environmental, economic and social impact of the movement and transport of alien species in the propagation of the species invasive. Also it urges the assessment of the risk they entail.

For its part, the Commission for Environmental Cooperation of North America , also considers this environmental problem as a priority because the trade and traffic of people and goods related to free trade, increases the chances of transferring invasive species in the region.

Following up on the commitments to protect your biopersidad of invasive species , some countries in the hemisphere have been concerned about the issue. Just to cite a few examples, in Mexico, the National Commission of Natural Protected Areas (CONANP) via the National Invasive Species Strategy seeks the creation and implementation of an appropriate regulatory framework to combat them , that decisions are taken in coordination with the various authorities and the constant generation of scientific knowledge in this field.

In the United States there is a Council specializing in invasive species, as well as a Plan of Action to combat its spread.

Unfortunately, the natural predator of the lionfish -the mero- presents levels of overfishing, so it can not be considered as an option repopulation. The International Coral Reef Initiative formed by representatives of governments, academics and civil society, keeps the dialogue to find alternatives Persians to prevent the spread of this pest through its group of experts.

The spread of the lionfish is a regional environmental problem that not only affects the Mesoamerican Reef and reefs of Puerto Rico, but also covers the ecosystems of Costa Rica and Panama. Thus the issue of legal and public policy is needed to increase international cooperation and exchange of experiences and strategies to address the problem.