A few days before his death, the environmental Ismael Solorio Urrutia had warned the Secretary of Government of Chihuahua, Raymundo Romero, the problems caused by the smear campaign against him and the Barzón, peasant organization to which he belonged, would grow. "If you do not put in the matter and do not give protection measures, could have deaths , " he said then. He had already received anonymous threats in this regard. 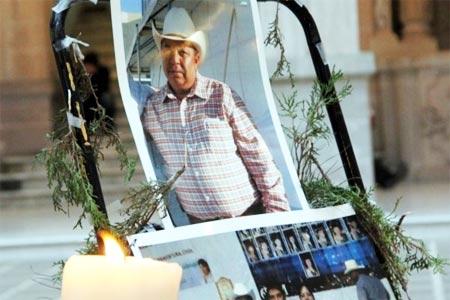 The complaint lodged with the second most important man in the state did not resonate and, on October 22, Solorio Urrutia and his wife Manuela Solis Contreras were found dead in a nearby farm to a Mennonite camp north of Mexico, in the State Chihuahua.

The main criticisms of the barzonistas are for the Federal Government, by the way allows the promotion of the field in a desert area, the irregular water use and permissions granted to mining companies in different parts of the country and in that state.

Also they accused the local government of allowing employees to participate in the smear campaign against barzonistas and having orchestrated through a newspaper belonging to the Organización Editorial Mexicana (OEM) .

The actions Solorio, one of the leaders barzonistas, and his wife performed were linked to the defense of the ecosystem. The couple questioned the theft of water in the catchment area of ​​the river El Carmen and installation of the mining project "May 5" by the Canadian firm Mag Silver.

The Barzón emerged after the crisis of 1995, triggered by the former president of Mexico Carlos Salinas de Gortari, and following which millions of Mexicans lost their land, homes and any type of credit by the devaluation of the currency. In the case of Chihuahua, your mobile is the defense of the land, because the organization has advocated for years.

According to a text published on social networks and the Internet by Victor Quintana , another human rights activist and social leader of Chihuahua, Solorio "made three or four times the path of pisión North, covering three quarters of the Republic to sue the rescue field or renegotiation of NAFTA, or state that in agriculture there are also outraged or to report suffering hunger drought rarámuri brothers. "

The barzonistas defend the catchment area of the river El Carmen , a closed area decreed in 1957, in which hundreds of irregular uses and few results of federal actions are recorded. This is an area where "there can be superficial and underground exploitations" they say.

Joaquín Solorio, brother of activist, told media persos few months before the double murder, the Barzón had placed each of the illegal logging in the watershed. They found for example in the river infrastructure developed mostly by Mennonites , through which retain water and do not allow to reach the dam Las Lajas.

In a cross-checking, they found 154 in the public register of rights, which was denounced illegal wells to Conagua and Semarnat.

The implementation in the area of the mining project called "May 5", which Solorio and his wife opposed, is the removal of lead, gold, silver, zinc and molybdenum. In fact, the vein in question is listed as a of the most important molybdenum in the country.

A week before his murder, Serrano was hit by alleged employees of the Canadian mining company Mag Silver, which constantly identified by its operations , which do not have preventive report or an environmental impact.

"They began to create a front against opponents of the project , there was prestige campaigns against him and his wife , " he complained a few days ago the brother of Ismael.

He also stated that it was the newspaper the Heraldo de Chihuahua, OEM who participated in the campaign against Solorio, his family and the Barzón. According to the peasants, these actions were orchestrated by the media office.

(With information from El Economista , Aristegui News and Process )