Climate litigation in Latin America and the Caribbean: Launching a regional platform

With the largest rainforest in the world, the largest freshwater reserves on the planet and the most significant amount of arable land where food is produced, the importance of Latin America and the Caribbean in the fight against climate change is undeniable.

Unfortunately, however, the region is also highly vulnerable to the damaging effects of the climate crisis, despite not being significant emitters of greenhouse gasses. As a result, human and environmental rights are being threatened in a context where defenders are constantly at risk. Sadly, the region has been recognized as the most dangerous for environmental and human rights defenders.

Strategic climate litigation has slowly grown in the region as a critical tool to complement the work for the defense of the environment, the territory, and the protection of the rights of peoples and communities. Litigating in the Global South and Latin America is different from litigating in the Global North, with particular challenges that must be addressed strategically.

Cases in some of the most dangerous countries for environmental defenders might render them more vulnerable to attacks and threats. A lack of resources might leave plaintiffs, who bravely stand up for the cause, unprotected, and not only from violence but from subtler maladies, such as emotional stress or stigmatization.

Another huge obstacle is the grave corruption that affects the region, which implies excessive power for extractive companies. Corruption is a widespread and deeply rooted phenomenon, especially in multimillion-dollar industries such as fossil fuels and extractivism. There’s a risk that companies or governments might co-opt academics, and proving and battling corruption is extremely difficult and dangerous.

Finally, one of the most severe obstacles to making climate litigation effective in Latin America and the Caribbean is the difficulty litigators face when implementing favorable decisions. LAC presents some encouraging but at the same time alarming statistics around climate litigation. Although the vast majority of cases that have been resolved so far have had favorable decisions, the implementation of these has, so far, been unsatisfactory. There is much to be done on this front, including identifying administrative deficiencies of States that influence the difficulty of enforcing decisions; and considering, from the planning stage of cases, which remedies are sought and how implementation will be demanded.

Despite these challenges, climate litigation is already showing the power it beholds in promoting change. In Peru, a group of young people sued the government for failing to formulate and execute a national policy and plan to curb deforestation in the Peruvian Amazon (Álvarez et al. v Peru). In Colombia, the Wayúu indigenous communities promoted an action to annul the environmental permit of a colossal coal mine (Mina Cerrejon). In Mexico, Greenpeace promoted an injunction to stop atmospheric pollution and improve air quality in the State of Mexico (Greenpeace v Secretaría de Medio Ambiente). In Argentina, the Organización de Ambientalistas Organizados demanded that the Ministry of Environment halts the approval of offshore exploration of fossil fuels for its impacts on whales and climate change (Organización de Ambientalistas Organizados v Ministry of Environment and Sustainable Development). In Ecuador, a group of nine girls questions the Ecuadorian State for authorizing oil companies to burn gas in the Ecuadorian Amazon (Caso Mecheros). In Chile, the NGO Defensoría Ambiental sued the government and all the companies operating in an emblematic sacrifice zone for the environmental damage caused after years of operations (Daño Ambiental en Ventanas). And these are only some examples. 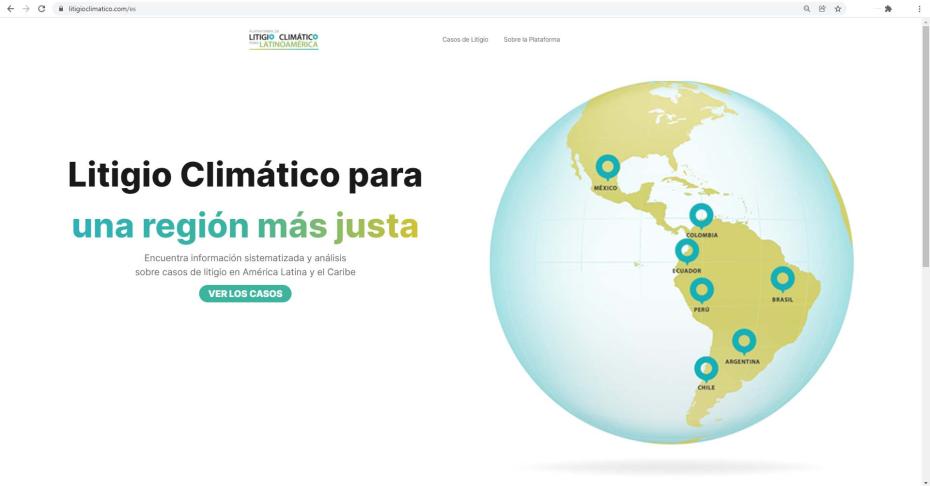 The Climate Litigation Platform for Latin America and the Caribbean has been created in this context. The Interamerican Association for Environmental Defense (AIDA), a regional NGO that uses the law to protect the environment and the human rights of communities, has been leading the effort in close collaboration with regional organizations and litigators who have been behind some of the cases in the region.

AIDA launched the platform in a webinar, the recording of the event is available here.

The Platform, which is maintained in Spanish, offers information on the judicial cases in the region that use climate arguments in a friendly and intuitive manner. It also includes a section of downloadable resources that might be useful for stakeholders who are planning on using the law to advance their cases. The goal is to promote more cases and better outcomes. Thus, the Platform is a tool to deliver, share strategies, experiences, and arguments on climate litigation, help create and strengthen alliances and facilitate contact between people who work in favor of the environment and climate.

This initiative emanates from a collaboration with different organizations. It is a cross-cutting and participatory initiative that feeds on collective work. AIDA’s initiative fits well within the collaborative endeavors of the Sabin Center. In December 2021, the Sabin Center launched the Peer Review Network of Global Climate Litigation to enhance the field of study and practice in climate litigation and ensure broad and equal geographic representation in our Global Climate Litigation Database. The Network includes national rapporteurs who help us ensure the database is comprehensive and up-to-date. In addition, the Sabin Center is continuously partnering with regional initiatives that specifically analyze climate litigation within a national or regional context.

As part of this ongoing effort, the Sabin Center has partnered with AIDA to share information and facilitate the exchange between collaborators of the two projects.

The launch of this regional Climate Litigation Platform is not only great news for Latin America and the Caribbean but also for the whole active global community that uses the Courts in favor of the planet.