What are the páramos and what can you do to protect them? | Interamerican Association for Environmental Defense (AIDA) Skip to content Skip to navigation

What are the páramos and what can you do to protect them?

What are páramos? The answers to this question are the very reasons why we must support their conservation.

They are rare and unique ecosystems. The páramos provide an environmental service to more than 100 million people. They possess the greatest botanical biopersity of all high-altitude ecosystems: 60% of their plant species are endemic (that is, they are found only in the páramos). Their formation is a slow and steady process that has taken hundreds of thousands of years. Although the Colombian páramo is considered tropical because it is situated near the equator, the climate is not hot. It is rather cool due to its high altitude of 3,000 meters (9,842 feet) above sea level. The páramo is a geographical paradox: a frosty ecosystem found in a tropical zone. It alsois an incredible beauty.

They form a major part of Latin American history. The páramo was dubbed “the land of the mist” by the conquistadores. The indigenous inhabitants incorporated the páramo in traditional ceremonies as it was considered to be a sacred area. The Muisca people of Colombia’s central highlands believed that the páramo gave birth to their primordial mother, the mythological Bachué. The famous legend of El Dorado also originated in the páramo; A Muisca chief was said to have covered himself in gold and thrown himself into Lake Guatavita, prompting the conquistadores to go on a great gold rush in the search of his treasures. During the Colombian War of Independence, Simón Bolívar crossed the Pisba páramo to elude Spanish army sentinels stationed on the main roads.

They are a vital water source and a carbon sink that combats climate change. The páramos feed streams, rivers, aquifers and water catchment areas. These in turn supply water to major South American cities including Bogotá and Quito. The páramo also have a remarkable ability to store water through its vegetation and unique geological and ecological features. It also acts as a carbon sink, accumulating carbon through organic matter in the soil. Invasive activities like mining have a detrimental impact on this process by releasing carbon stored in the soil, contributing to global warming.

These points demonstrate how the páramos play an important role as a vital source of water and an ally in combating climate change. Their protection is crucial for our future.

In Colombia, where more than half of the world’s páramos are located, the government is making a decision on the future of these valuable and fragile ecosystems through a process of officially demarcating their territorial boundaries. Despite the ecological and environmental importance, the boundaries of the Colombian páramos still have not been defined. This poses a serious risk to the area as it is left vulnerable to harmful activities that could destroy it. 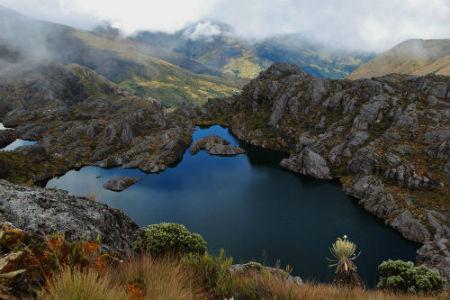 To truly protect the páramos from irreparable damage it is essential to clearly define its territorial boundaries. The Santurbán páramo, located between the departments of Santander and North Santander, will soon become the first area to be officially demarcated, according to government plans. Mining interestsalready pose a threat to the area.

What is urgent now is for Colombia’s minister of environment to demarcate the Santurbán páramo territory based on scientific criteria. AIDA is taking online action to call for this proposal. With YOUR SIGNATURE, you can support the cause and pressure the government to protect the páramos.

Join us to protect the páramos!YOU CAN SIGN too (in Spanish)!ASK Colombia’s president and minister of environment to properly delineate the Santurbán páramo NOW!