Panelists of the event held during the COP20 in Lima, Peru.

All countries have an obligation to fight climate change. But they must also protect the human rights of their people. The fact that officially recognized clean development projects aimed at combating climate change often cause grave human rights violations was discussed Tuesday at a side event at the COP in Lima.

Co-hosted by AIDA, the p for International Environmental Law (CIEL), and Carbon Market Watch, the side event asked the question, "How can the lessons learned from the Clean Development Mechanism (CDM) influence the design of climate finance mechanisms?"

Máximo Ba Tiul stood before the room and spoke of the grave impacts of the Santa Rita hydroelectric project, which was registered under the CDMof the United Nations Framework Convention on Climate Change. A representative of the Tezulutlán Indigenous Council of Guatemala, Ba Tiul explained that the so-called clean development project has caused human rights violations, including the death of children, in at least 20 surrounding communities.

Hugh Sealy, President of the Board of the CDM, replied that he was "disturbed" to hear that a CDM-registered project had allegedly violated human rights.

While hydroelectric projects such as Santa Rita are promoted as clean energy solutions to climate change, scientific evidence has shown that large dams, particularly those in the tropics, release large quantities of methane, a greenhouse gas 20 to 40 times more potent than carbon dioxide. 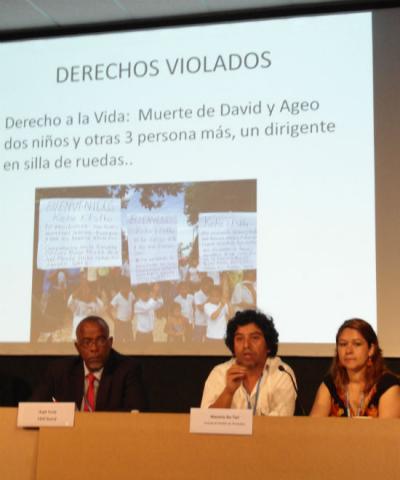 "All countries must respect human rights," Niranjali Amerasinghe, director of CIEL’s Climate & Energy Program, said during the event. He explained that the connection between climate change and human rights, or, more precisely, the impact of one on the other, has been recognized in previous climate agreements, such as those drafted at COP16 in Cancun, Mexico. Amerasinghe advocated for consistency within the Convention in terms of applying social and environmental safeguards.

Andrea Rodriguez, an AIDA senior attorney, spoke of the importance of implementing such safeguards, particularly with respect to the Green Climate Fund. The Fund must adopt the strictest standards in the design of their social and environmental safeguards, she said. Only in this way can they ensure that projects financed won’t cause harm to the environment or violate human rights.

Rodriguez said that the best international standards must be applied to projects at every phase of development, along with ongoing evaluation to learn from mistakes and to guide the choice of tools that have proved most effective.

During its first three years of operation, the Green Climate Fund will use the standards of the International Finance Corporation (IFC), which Rodriguez considers "insufficient for preventing harm."

Ba Tiul noted that the challenge is for all United Nations entities to honor differences and respect human rights. Amerasinghe added that projects registered with mechanisms like the CDM should be monitored throughout implementation, not just during the initial consultation and approval phases. And, faced with allegations of human rights abuses, he said, authorities must not hesitate to undertake an investigation.

At the conclusion of the event, Sealy thanked the participants for the information provided and promised to do everything possible to strengthen the Clean Development Mechanism consultation process.

For more information from COP20 and to post comments, visit our interactive blog at aida-cop.org