Hope for the Ciénaga, seed of Colombia’s magical realism

“We were in the great swamp, the Ciénaga Grande, another of the myths of my childhood.”– Gabriel García Márquez in Living to Tell the Tale, 2002.

Today I learned that Colombia—thanks in part to AIDA’s supporters—took an unprecedented step to save an ecosystem central to Colombia’s identy: the Ciénaga Grande de Santa Marta.

As a Colombian and an environmental attorney, I’m deeply moved. And so thankful to the hundreds of supporters whose petition signatures helped move the government to action.

The government added the Ciénaga Grande to the Montreux Record, a global list of at-risk wetlands. This action will provide Colombia with international technical and financial support needed to save the vital ecosystem.

When I heard the good news, I immediately thought of the yellow butterflies of Macondo.

And I thought of Colonel Aureliano Buendía, who stood in front of a firing squad remembering the day his grandfather took him to see ice.

The imagery of this magical world, masterfully created by Gabriel García Márquez in One Hundred Years of Solitude, was born from the Ciénaga Grande de Santa Marta.

In the early 1900’s, after the Thousand Days’ War, Colonel Nicolás Ricardo Márquez, grandfather of Colombia’s Nobel laureate, passed through the Ciénaga to settle near Aracataca. Later, accompanied by his grandfather, the author crossed the Ciénaga Grande various times to visit his parents in Barranquilla. In 1950, he crossed it again with his mother as they were going to sell his grandparents’ house.

It was there, in the Ciénaga Grande, that Márquez found the spark that would light one of the classics of modern literature.

So it’s no exaggeration to say that without the Ciénaga Grande, we wouldn’t have the yellow butterflies, or Macondo, or Colonel Aureliano Buendía, embedded so deeply into our cultural memory. It was there that the seed of magical realism was planted.

That’s why even a cachaca like me—what those who live in the Caribbean call those of us from the country’s interior—who has lived for many years outside her country, identifies so deeply with the Ciénaga Grande. 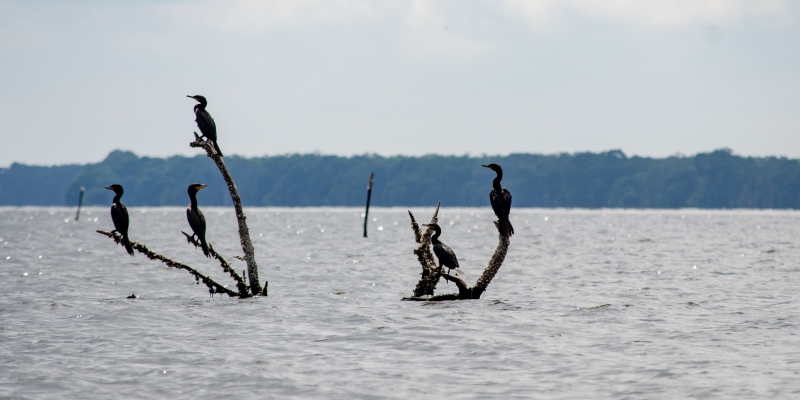 For that and so many other reasons, we at AIDA decided to act in defense of the Ciénaga Grande, named a Wetland of International Importance under the Ramsar Convention.

It’s home to Colombia’s largest coastal lagoon, which connects the fresh waters of the mighty Magdalena River with the salt water of the Caribbean Sea. The area is home to many species of mangrove, as well as tropical and riparian forests. It shelters raccoons, howler monkeys, manatees, red herons, ducks, and migrating birds.

The Ciénaga Grande also hosts one of the largest artisanal fisheries in Colombia, which supports hundreds of families throughout the area. As a coastal wetland, it’s essential for climate regulation, absorption of pollution from the atmosphere, and flood control.

But the Ciénaga Grande is gravely threatened. The spread of mass agriculture and livestock farming, along with large-scale infrastructure projects, has led to deforestation and water diversion. The animals and fish and people of the area are suffering as a result.

That’s why I’ve joined the efforts to conserve the Ciénaga Grande, and why every person in Colombia, in the region, and in the world, should do the same.

Hope for a healthier tomorrow

The addition of the Ciénaga Grande to the Montreux Record fills me with hope. Although it’s shameful such an important ecosystem is in such bad shape, having the government recognize that fact and ask for help is an important advance.

Thanks to all the caring activists who’ve joined the cause, my colleagues and I are inspired to do everything we can to ensure that the Ciénaga Grande recovers its vitality. We expect the government will do the same.

After all, what would Colombia, Latin America, and the world be without the yellow butterflies of Macondo, and without the magic of nature to envelope us and gives us life?

Astrid Puentes Riaño is one of the two Co-Executive Directors of AIDA. She is responsible for AIDA’s legal efforts and organizational management. Originally from Colombia, Astrid has worked for AIDA since 2003. She has significant experience linking environmental protection with human rights, and climate change, highlighting the importance to prioritize climate justice. For over twenty years she has been working on public interest litigation, especially in the field of human rights, the environment, and climate change. Astrid holds an LL.M. in Comparative Law from the University of Florida, a Masters in Environmental Law from the University of the Basque Country, and a J.D. from the Universidad de Los Andes, Colombia. Astrid has also taught several seminars and classes on human rights, the environment and climate change, including at American University Law School in Washington, and the Universidad Nacional Autónoma de México (UNAM).