We all know coral reefs are fragile environments, highly vulnerable to climate change and pollution. But did you know they also had to compete for light and oxygen with the tiny macro-algae that cover their surface?

That’s why some of corals' best friends are herbivorous fish—species like parrotfish and surgeonfish that feed on algae, helping to keep corals healthy.

But in the Caribbean, unsustainable fishing practices are causing a decline in populations of parrotfish (and other herbivorous fish), putting the health of corals at risk.

That’s why, in AIDA’s marine program, we’re launching a large-scale project dedicated to the conservation of herbivorous fish throughout Latin America—focused on the nations of Colombia, Costa Rica, Guatemala, Honduras, Mexico and Panama.

The parrotfish is one of the most important fish living in coral reefs.

They spend most of the day nibbling on corals, cleaning algae from their surface. They also eat dead corals—those bits and pieces that protrude from the reef—and later excrete them as white sand.

A key element to maintaining sustainable fisheries is catching only adult fish—those that have already matured and reproduced. But in the Caribbean right now, people are fishing juvenile parrotfish.

Though not a commercial species, parrotfish are being captured because they’re some of the only fish left in the reef. The irresponsible nature of commercial fishing in the region has caused a drastic decline in both commercial and herbivorous fish.

“A key element of maintaining a sustainable fishery is catching only adult fish, which have already matured and reproduced. But what’s happening in the Caribbean is the fishing of young parrotfish,” explained Magie Rodríguez, AIDA marine attorney.

Most fishing is done with gillnets and hooks, which cause high levels of by-catch—unwanted populations of marine species caught in commercial fishing. Harpoons and traps are also used, which prevent younger, smaller fish from escaping and continuing their life cycle.

Surgeonfish and damselfish are two other herbivorous fish—both small and quite beautiful—falling victim to irresponsible fishing practices. Their popularity in tropical home aquariums has led to a decline in their wild populations.

Remember Dory, from Finding Nemo? She was a surgeonfish, and the movie’s popularity led to an increased demand for her species in aquariums. What the movie didn’t tell you is that the surgeonfish’s small, sharp teeth are highly adept at chewing algae, preventing the plantlife from essentially choking coral reefs of oxygen and light. 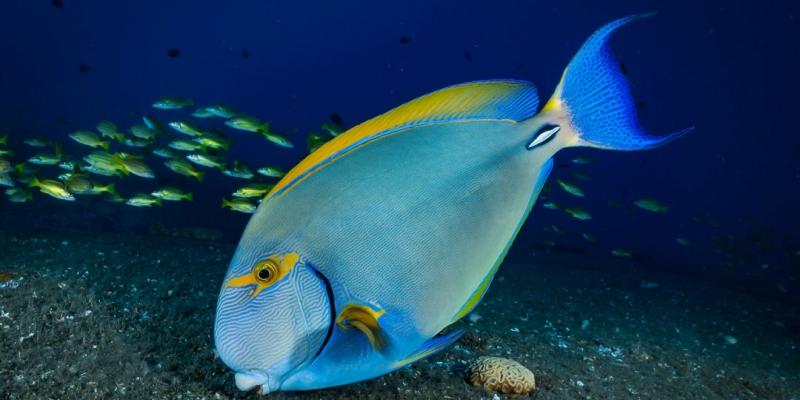 AIDA’s project for the conservation of herbivorous fish in the Caribbean is in its initial phases. Our objective is the implementation of diverse strategies, across the six Latin American nations, to protect these fish and, by extension, the reefs they call home.

“To restore the balance of the coral ecosystem, it’s necessary to achieve the recovery not just of herbivorous fish populations, but also of commercial species,” Rodríguez said.

So we’re talking not just about fishing bans, but also about the general adoption of sustainable fishing tools that take into account the tourism potential of coral reefs.

Corals are, among other things, a source of economic income and food for coastal communities that live from fishing and tourism. Plus, they are natural barriers against storms and hurricanes.

“Corals do a lot for us and we have to take care of them,” Rodríguez added. “We’ve come to find that the best thing we can do to keep corals healthy is to protect the herbivorous fish that call them home.”