Why damming rivers, like blocking veins, risks our health

Some of my most treasured childhood memories happened in or near a river. I can still feel the cold water on my feet, and the current that pulled me smoothly past rocks and branches.

I remember vacations with my cousins, throwing ourselves into the river near my aunt and uncle’s country house, leaping from the tops of rocks or swinging from the branches of a tree. I remember summer road trips, driving down seemingly endless bridges over the great rivers of southern Mexico.

I’ve always thought of rivers as the veins of our planet. In their waters, the rivers and their tributaries carry nutrients to wetlands, lakes, and the sea. They carry oxygen and host thousands of species. They supply drinking water to millions of people in small towns and big cities. They give us food, entertainment, transportation, and life.

Recent natural disasters have reminded us that—despite our best attempts—there are no limits, dams, dikes or pipelines that can control the water. It’s true that, properly implemented, dams can have benefits; but in many cases, particularly those of large-scale development, the damages dams do far outweigh any benefits.

There are currently more than 300 large dam projects planned or in construction throughout Latin America. Many of them are underway without adequate social and environmental impacts assessments. The results are displaced communities, destroyed forests, and rivers with no fish.

The water flowing down our rivers is vital to the natural equilibrium of the planet and its climate. It’s like the blood circulating through your body.

If your bloodflow were blocked, you’d get cardiovascular disease, maybe even a heart attack. Well, damming rivers is like intentionally blocking your veins and expecting no problems.

Only one third of the world’s great rivers remain free-flowing, without dams or canals.

Now I’m not a doctor, or a biologist, but I often wonder: are we heading for the collapse of our natural system by blocking, tubing, manipulating, and contaminating the veins of the Earth (which, like us, is a living organism)?

And because rotting vegetation in dam reservoirs releases lots of methane (a super-potent greenhouse gas), isn’t the current climate crisis, in part, a response to the blockages in Earth’s circulatory system?

The mouth of the Colorado River opens to the Sea of Cortes, in northeast Mexico. It’s an area historically rich in sea life from the Gulf of California.

For eons, the flow of the Colorado brought nutrient-rich sediment to the Sea of Cortes. It kept the coastal estuary rich and healthy, along with the animals that sought shelter there. But that’s not happening anymore. The vaquita, now the world’s rarest marine mammal, teeters on the edge of extinction.

Between the Colorado River’s mountain headwaters and the end of its main channel, more than 10 large dams and 80 water diversions have squeezed the river dry. Now the Gulf no longer receives the river’s nutrient-rich waters, harming not just marine life like the vaquita, but also the area’s fishermen.

No one mentions that the near disappearance of the vaquita has been caused by habitat destruction due to the upstream dams on the Colorado River.

The San Pedro Mezquital River is the last undammed river in the western Sierra Madre Mountains. The river links the region’s indigenous people. It’s a source of their culture and identity. The river channel, more than 500 kilometers long, connects the forests of the highlands with the wetlands of the coast, opening into Marismas Nacionales, the largest mangrove forest in the Mexican Pacific.

Marismas Nacionales, declared a wetland of international importance, is home to more than 12,000 families engaged in fishing, agriculture, and tourism. But this national treasure is at risk due to the government’s plan to build a hydroelectric dam on the San Pedro Mezquital.

If the river were blocked, its contribution of nutrients downstream would be drastically reduced. The health of Marismas Nacionales, its rich biodiversity, and the region’s sustainable local economy would all be slowly starved. The reservoir would also destroy at least 14 sites sacred to local indigenous communities.

But we’ve still got time to stop this plan and others like it. We can avoid the collapse of the natural world that surrounds us, on our one and only planet. By supporting AIDA, you can help keep Earth’s veins flowing free. 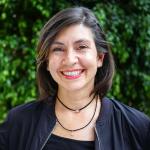 Aída Navarro is based in Ensenada, Mexico and is AIDA's human resources advisor. A native of Mexico, she has extensive experience coordinating conservation projects in the Baja California Peninsula, including international outreach and media campaigns to promote marine conservation since 2002. Aída holds and MSc in Environment and Development from the University of East Anglia and a B. A. in International Trade from the Instituto Tecnológico y de Estudios Superiores de Monterrey.